You are here: Home › A Prelude to Dying
By Don Lake on December 1, 2014 in Senior Fiction, Writing 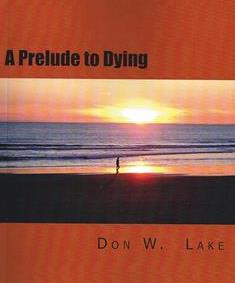 Ernie Jackson’s doctor made it clear, the blood test was for Appendioccualritus , and Ernie’s reading came back at a level almost never before seen. The problem was that no one who has ever tested with levels as high as half of his had ever survived more than six months after diagnosis.  Once over the shock, Ernie decided he had one last chance to do something with his life besides pushing numbers around corporate P & L’s. He vowed to take his one chance and do something about the organized drug scene in Santa Christina.  The only thing he could think of to do was to follow the money trail, starting from finding a neighborhood pick-up point all the way to the top.  The drug pros didn’t make it easy, but  Ernie is dedicated, persistent, fearless, cleaver, lucky, and with a subtle little help from the “wanna-be” next drug lord, kept on the trail through all its perils.

Doctor’s offices always seem to be exactly the same; furnished in late 1960’s modern, uncomfortable, and quietly desperate. It’s one thing when you’re actually sick or injured, because then you are already uncomfortable and worried. Then the office feels the same way you do. It’s another thing when you know you’re not injured, and don’t think you’re sick, and yet the doctor has made a priority of meeting with you at the expense of putting off his other patients.

I waited almost eight weeks to get an appointment for a complete physical. Just three days later, I’d gotten a call to meet with my doctor. This didn’t seem to be a good sign. Nor did the fact that I’d been sitting in the reception area for less than thirty seconds when the fifty-something nurse called to me and then led me directly to the doctor’s private office.

George Arbuckle had been practicing medicine in Santa Christina since he got out of the army, some time near the end of the Vietnam war. I’d picked him from my HMO’s approved list only because his office was nearest to my home. If he had ever had a pleasant bedside manner he’d lost it long ago. But he seemed to know all that there was to know about men’s health problems.

Before I was even seated in the chair across the desk from him, he said, “Ernie, I got the results of the blood tests we ran on you the other day, and they are singularly bad.”

“They came back positive for a once rare, but increasingly common disease. It’s got a long, technical name but basically it is a cancer that originates in the appendix and can stay dormant there for years. When it finally breaks out, it travels through the blood and attaches itself to areas of the body that have been badly scarred sometime in the person’s lifetime. You’ve had more than your share of such injuries over the years, haven’t you?”

“Yes I have. I spent years playing baseball, football, that sort of thing.”

“About how many stitches have you had? How about boils, carbuncles, things like that?”

I thought for a second or two. “I’ve had maybe fifty stitches and there was a year there when I had one or two carbuncles somewhere on my body at all times.”
“Any of those on your head or neck?”

George swiveled his chair to look away from me and out the window at the fog boiling in from the nearby Monterey Bay. It seemed an eternity until he finally turned back to face me.

“I was afraid of that. It means there is no chance to operate.”

“Operate?” The sound was more of a croak than a question.

“The test for Appendioccualritus – the disease – has been around for a while, but has just recently been added to the list of standard blood tests for people over sixty. Your reading came back at a level almost never before seen.”

I tried a joke. “So I’m nearly eligible for the Guinness Book of World Records, am I?”

“Well, maybe. The problem is that no one who has ever tested with levels as high as half of yours has ever survived more than six months after diagnosis.”
I’m sure my mouth dropped at least to my knees. I know I couldn’t have said anything. I seem to recall staring at him. The nurse put a glass of water in my hand, which I drank more out of reflex than anything else.

“You mean …” I finally stammered.

“Yes. If you’re alive for your next birthday — it’s in late September isn’t it? — you will have indeed qualified for the Guinness Book of World Records.”

“No way! If I’m that close to dying, shouldn’t I be hurting somewhere?”

“You’re lucky in that respect. This disease starts by attacking scar tissue, which often has no nerve cells or at least dead ones, so you don’t feel any pain. Sometimes it manifests itself as pain in any joints that may have been injured, but folks usually just shrug that off as arthritis. You feeling anything like that?”
“Of course, but I’ve been feeling that way for years. It hasn’t gotten any worse lately.”

“Here’s what we’ll do next. As unlikely as it is, there is a chance that the lab may have screwed up. I’ll have the nurse take two more blood samples and we’ll send them to two different labs. That will assure that there is no mistake.”

I nodded. “Is there anything at all that I can do?”

“Short of having your appendix removed twenty or thirty years ago, no.”

“But I’ve never been sick!” I shrieked. George didn’t respond.

“Meanwhile, I’d go take a good hard look at your estate, make sure everything is in proper order, your will, trust, life insurance, all that sort of stuff.”

“My wife and I just did that. We both just turned sixty, so we did a complete review and upgrade of everything. It just took a while to get the physical scheduled. Now I wish I hadn’t”

“No, you don’t wish that. Dropping dead or suddenly becoming totally incapacitated is a very bad thing. You have a prelude to dying. You have time to do those things that you always wished you could do, or should do. Take advantage of it.”

He stood up and shook my hand. The nurse took out a tissue and wiped the tears from my eyes.

I like to sleep with the window open. For me, the more fresh air I can get at night the better. Along the coast of the Monterey Bay, the Northern California nights are cool, often damp, but never cold. That cool fresh air not only feels good, but the way it smells can change from night to night. Most of the time it smells like ocean but sometimes, when the wind changes, it smells like the redwood forest that lies just east of us.

While I like the fresh air, I don’t like to feel all wrapped in blankets like an Egyptian mummy. I like to sleep with my arms out of the blankets. To accommodate this, I long ago took to sleeping in a long-sleeved sweatshirt. It’s not very sexy, or romantic, but it keeps me warm and assures a good night’s sleep.

Doreen adapted to my sleeping quirks well enough. For the twenty years she was single she did everything her way. I was flattered when she adapted to mine. She now slept in a long-sleeved floor-length flannel nightgown, usually covered with little flowers. She liked to burrow under the blankets with only her head poking out from beneath them. After a kiss good night, we’d usually roll apart, arrange things to our liking, curl up into the fetal position, mumble a muffled something or other to each other, and drop right off to sleep.

Tonight though, I lay staring at the ceiling with my sweatshirt-covered arms locked behind my head. Doreen noticed. “Are you all right?” she asked in a voice much louder than the usual mumble.

“Then why aren’t your sixty-year-old eyes shut?”

“I’ve been thinking about what you said earlier tonight.”

“Well, I’ll be,” she said as she rolled over toward me. “That’s a first. I can’t remember the last time you heard anything I said when the sports highlights were on TV. What did I say?”

“You said I should do something special and meaningful. I think you’re absolutely right about that.”

“Good for you! What are you going to do?” The tone of her voice made it seem as if she was not only listening but interested.

The reply was quick and sarcastic. “Yeah. Sure you are!”

“I am,” I said. “If I find him I can break up the whole drug deal and give the kids of the county a chance.”

“That’s a nice idea, but how will finding him do that?”

Doreen jerked the blankets almost to the floor when she sat bolt-upright. “You’re going to do what?”

“I’m going to kill him. That ought to take care of things.”

“You’re crazy. These guys have bodyguards and such. They’ll kill you.”

“And even if you do manage to pull it off, the police will catch you and throw you in jail for the rest of your life.”

“Doreen,” I said in my calmest, most matter-of-fact tone. “Listen to what you’re saying. I’m about to die anyway sometime in the next six months. None of what can happen to me matters. But, if I can do it, it may matter to the kids around here.”

She was staring at me. Her disbelief was clear even in the dim light of the new moon.

“As I see it, the biggest problem is if I die too soon either from Appendioccualritus or because he somehow caught on to me.”

“You’re crazier than even I thought.”

I sat up and kissed her. “Promise not to tell?”

“You know I wouldn’t dare. No one would believe me, and half my friends would make fun of me for being crazy.”

She put her arm around my shoulders and pulled me to her. “Come here crazy man.”