You are here: Home › Maniac Motion
By Don Lake on December 2, 2014 in Writing, Young Readers 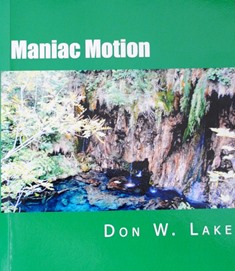 The two arrived shortly after the great earthquake rocked Santa Christina.  She came to teach music, he to recover the invention stolen from him by his nephew.  But only when an aftershock threw the nephew into the river gorge, and John found the nephew’s credentials, did the undercover detective from Washington DC revealed himself and the peril the Keenan family faced.

First there was a loud BANG, quickly followed by a shaking and rolling of the entire Santa Christina School.

“Earthquake!” yelled John and Crystal’s teacher. “Hurry! Everyone under their desks. Hurry! Hurry!”

John and Crystal hunkered under their desks. From that vantage point they saw their books, pencils, and papers fall onto the floor around them. They heard the books crash to the floor from their shelves. They saw the glass from the windows break on the floor next to their desks. Crystal and several of the other girls screamed.

In Kathy’s classroom the scene was much the same. The older students were somewhat more composed, but they were still very scared.

The shaking and rolling went on for almost a minute. When the building stopped moving all of the tall windows, made tall to let in as much light as possible, lay broken on the floor. The only things that moved after the building settled down were the heavy lamp fixtures that hung from long chains from the high ceilings. It took several minutes before the fixtures stopped swaying back and forth.

Ebenezer, and several other parents, rushed to the school just as soon as the earth stopped shaking and rolling. The school, a clapboard, wood-frame building, stood defiantly when Ebenezer arrived. From the school yard where the students had gathered they could see several of the town’s brick and stone buildings with entire walls lying in rubble. A few of them were burning. Children and parents clung to each other and watched the black smoke rise into the gray, foggy sky.

Ebenezer spoke to his children. “Kathy, John, Crystal, you have just experienced a very large earthquake. Earthquakes are a phenomenon of nature. They happen all over the world. As you now know, they can be very frightening. Once the first one occurs there are often several others, smaller ones called aftershocks, which occur for several days afterwards. They too can be frightening, but we will live through all of them.”

“Father,” Kathy said. “There was lots and lots of damage. Lots of things were broken and smashed. Was anyone hurt?”

“I don’t know yet,” Ebenezer said. “I’m just thankful that we are all safe.”

Ebenezer put an arm around each of his girls. “I hope not. We will see when we go home in a few minutes. I’m sure we will all have work to do to get things cleaned up,” Ebenezer said.

John pointed his finger downriver from the school. “Look at the new river bridge. The scaffolding is all twisted and broken, but the bridge is still standing.”
“The bridge was almost complete. It was scheduled to open in just four or five weeks,” Ebenezer said. “It’s a good thing it was so far along. Iron bridges don’t get strong until all of the tresses and supports are in place. Almost all of them are already installed.

“Come along now children, the officials here at the school have now counted you as safe. We can go home now.”

When the four of them entered their house they found things scattered on the floor. Two chairs had moved across the floor in the parlor. All of the cabinets, bookcases, dressers, chests and armoires were in their proper places.

“Take this as a lesson, children,” Ebenezer said.

“Always secure your furniture to the house walls to keep them in place during an earthquake. And always keep the doors and drawers well latched. It helps keep things safe in times of crises

Kathy, the eldest, had assumed many of the family responsibilities after their mother had died of the pox in 1872, said, “Come on now, let’s get to work and get the mess cleaned up.”

School remained closed for a full week while officials carefully examined every inch of the building. They found a few places in the foundation that needed to be repaired. All of the rubble was cleaned up and hauled away. Finally, all the windows were replaced. The school seemed better than new when it reopened.

Mister Scarlotti, the school’s science teacher, had spent the break from classes building a new set of science demonstrations to show his students. The first was a heavy ball with a pointed tip at its bottom. It was attached to the roof beam in his classroom with an iron chain. Under the ball was a low table covered in sand.
To each of his classes he showed how the ball and chain formed a mechanism called a pendulum. He had the students carefully smooth out the sand. He then pulled the ball back to the edge of the table. When he let it go, the point on the bottom of the ball traced a line in the sand.

The pendulum swung back and forth for a long, long time. It was still swinging in its straight line at the end of class, but the lines in the sand had moved. “Students, this shows that the pendulum swings true, but because the earth rotates, a pattern appears. This is one way to show the principle of harmonic motion.”

The science class students didn’t quite know what to make of the pendulum demonstration. The first three classes that saw it, including Kathy’s, were mostly bored. The pendulum was tracing out its pattern for John and Crystal’s class, when a noticeable earthquake aftershock struck Santa Christina. Everyone knew what to do. They quickly ducked under their desks.

The shock, vibrating, and rolling lasted just a few seconds. The pendulum swung wildly through it all. When the shaking ended, Crystal bent down and studied the lines in the sand. “My goodness, isn’t that pattern pretty. It looks like a flower,” she said.

The rest of the students rushed over to see what a sand flower looked like. Mister Scarlotti told the students to draw the pattern in their sketchbooks. For their homework he asked them to tell him what kind of flower they thought it might be.

That afternoon, after their chores were done, and before Ebenezer came home, Kathy, John, and Crystal sat around the kitchen table looking at the sketches John and Crystal had made.

“You two made pretty good pictures,” Kathy said. “It only takes a lot of imagination to see a flower in what you drew.”

“I think they’re pretty good,” John said defensively. “We couldn’t trace it you know. We had to be artists and draw it.”

John started flipping through the pictures in the gardening book he’d taken from the shelf in the den. “Let’s see, which is the tangled string flower? Oh, here it is! The book says it is a …..” John paused to sound out the word.

“Let me see that book,” Crystal said. She ripped the book from John’s hands. “Here it is. It’s an aster.”

Kathy took the book and flipped through it. She went all the way through it, scanning every page. After she started through it once more, she stopped on a page near the front of the book. “It’s pretty easy. It’s a daisy,” she said.

Ebenezer walked in to find his three children standing shoulder to shoulder at the table staring down at a book and two sketches. “Hello children,” he said.
“Father, come, you be the judge. Tell us which one is the correct flower.”

Ebenezer contemplated the sketches for a time, and then the two candidate flower pictures. “It’s a daisy,” he declared.

“Thank you father,” the three children said in unison.

“Now then, tell me what this is all about,” Ebenezer said.

For the next ten minutes the children explained the demonstration of harmonic motion to their father.