You are here: Home › The Lost Frenchman Mine
By Don Lake on December 2, 2014 in Senior Fiction, Writing 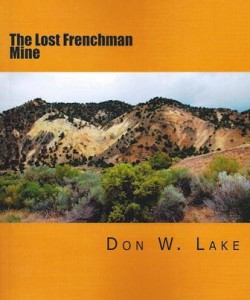 When a recently retired, top Silicon Valley engineer, Adam Borodagay, sets out to find San Diego’s legendary Lost Frenchman Mine, he comes face to face with far more than he’d bargained for. Instead of rediscovering the richest silver deposit ever assayed, he unearths strange containers filled with silver ore mixed with other strange materials.  Finding the ore is hard enough, but it only lead to the problems of determining what the odd materials are, how they behave, and how best to apply them.  The three dead men who came before him, a crooked border agent, a Mexican drug czar, the director of an obscure government agency, and to top it all off, the guard, compound Adam’s difficulties.

“Listen to this,” Adam didn’t wait for a response from his wife curled up in the matching overstuffed chair alongside his.

“According to local lore, the mother of all California lost mines contains not gold, but extremely high-grade silver. It is not of Spanish origin, but French. And, it is located in San Diego.”

“The lost Frenchman Mine is believed to be somewhere at the base of El Capitan Mountain, east of San Diego, near the city of El Cajon. The mine was excavated by a fellow named Pierre Hausenberger in the middle 1800s, according to accounts.

“But if discovering a rich deposit of silver ore was a high point for Hausenberger, a low point was soon to follow. To have his ore assayed, Hausenberger was forced to leave his mine and travel to northern California. The Frenchman left San Diego on the steam side-wheeler Senator with five sacks of ore bound for the assayer’s office in San Francisco. But along the way, Hausenberger became ill and died.

“When the Senator tied up in San Francisco, the ship’s purser found one of the dead man’s five sacks had torn open. Thinking nothing of the seemingly worthless dirt and rocks from the torn sack, the purser gave it to an unidentified fellow and unceremoniously pushed the other four sacks off the pier and into the water.

“Samples of the first sack ultimately made their way to the assaying office, and the results showed the ore worth an incredible $20,000 per ton. But with Hausenberger dead, there was no way to connect the silver with any particular source.”

Barbara cocked her head quizzically at her husband. “What are you reading?”

“A book entitled San Diego Legends, the Events, People and Places that Made History,” by Jack Innis.

“This one sure sounds like a bona fide legend to me,” she said.

“Several years later, the mystery sparked the interest of San Diego pioneer Ephraim W. Morse. On a trip to San Francisco, Morse interviewed several sources and ultimately learned about the four sacks that had been dumped off the pier.

“When Morse arrived at the pier, he discovered that the site had been covered over with dirt. The stubborn treasure seeker embarked upon an all-out excavation of the area – and as luck seems to reward hard work – found the four sacks. The ore in those sacks assayed out as did the first.

“Having verified at least the first part of the story, Morse gleefully returned to San Diego and gave a speech at the San Diego Lyceum in December 1879, requesting information from anyone who had known the Frenchman.

“One notable San Diegan, Don Luis Estudillo, said he remembered the man well, and even recalled him showing up in town, San Francisco bound, with five sacks of ore. Morse hired a scout and led an expedition around the back country, but could not pinpoint the mine. Morse dropped his quest and gave up on the Lost Frenchman Mine.”

Barbara said, “Undoubtedly for very good reason, the mine being a legend and all.”

“A few years later a story circulated in the press that a man who lived on the slopes of El Capitan showed up in Los Angeles with a huge chunk of nearly pure silver, which he sold for a hefty sum before going on a drinking binge.

“About a month later, the man returned to Los Angeles with several bags of the nearly pure silver, sold them all, and set out drinking again. Unfortunately, the man was stabbed to death in a bar fight, and what is believed to be the secret location of the Lost Frenchman Mine was buried with him.”
Barbara said, “Of course, otherwise it wouldn’t be lost, nor would it be a legend.”

“The story finishes in one more paragraph,” Adam said.

“Unfortunately for modern-day treasure hunters, uncertainty exists as to which mountain was called El Capitan in the early days. According to most, the El Capitan of yore is now called El Cajon Peak. But others insist that El Capitan is a shortened version of El Capitan Grande de Cullamac Mountain named after Francisco, grand chief of the Cuyamaca Indians. If El Capitan was actually present day Mount Cuyamaca, those who search for the Lost Frenchman Mine near El Cajon would be a few dozen miles south of the real find.”

Barbara said, before turning back to the book she was reading, “It’s no wonder no one’s found it. Who would ever say exactly where the treasure was? Even the old timers knew to hide their finds. I’ll bet this Pierre fellow never even filed a claim. Of course, it is hard to file a claim on a legend.”
Adam said, “I think it’s pretty exciting to have a lost mine and treasure right near to where we’ve moved. Besides it must be more than a coincidence that Julie teaches at Morse High, and my grandfather immigrated to California from France.”

“You just watch, something will turn up soon that’ll be the clincher for all of this,” Adam said.

“I don’t know what, but it will, you just wait and see,” Adam said.

The winter sun had begun to warm the La Mesa hills before Paul arrived for his day’s stay at his grandparent’s house. Barbara fed him, changed him, and had him happily playing on the kitchen floor before setting down to breakfast. The usual weekday routine had Adam finished with the sports page and onto the comics before Barbara sat down at the table. Today the morning paper remained unopened on the table between them. Instead of the newspaper, Adam had the East San Diego county map spread out in front of him. Barbara raised an eyebrow, but said nothing.

After breakfast Adam cleared the table, put the juice and milk back in the refrigerator, bent over and picked Paul up from the floor. “Are you ready for a ride, Paul boy? You look like it.”

“What about his morning nap?” Barbara asked.

“We’ll be in the car for quite awhile, he’ll get plenty of sleep.”

Barbara sighed. “You really are anxious to go look for the legendary mine, aren’t you?”

“I guess it’s better than pushing the vacuum,” Barbara said.

The first few times Adam tried to put Paul into his car seat took several minutes. They’d both gotten better at it once the baby discovered how to assist his grandpa in the process. On this morning the entire operation took less than a minute. Once the diaper bag and stroller were stowed in the trunk, they backed out of the driveway and headed down the hill toward the freeway. Paul was asleep before they turned up the on-ramp.

The trip on the freeway to the east side of El Cajon took less than ten minutes. Adam took the off-ramp nearest to the area he’d circled on the map, and headed north toward the house and apartment covered foothills. Adam stopped the car by the curb at the base of the first hill. The houses on either side of the street all had iron bars covering the windows and doors. A few of the yards showed signs of care; others were filled with parked cars.

“Yes. It looks like a tough neighborhood,” Barbara said.

“Not that. This kind of neighborhood isn’t bad this early in the morning,” Adam said.

“Look at the way these houses were built,” Adam said. “Whoever developed this area simply bulldozed the hillside into terraced lots. Whatever the original contour of the land may have once been, has been totally obliterated.”

Adam turned onto the street that ran along the base of the hill. Barbara navigated while they drove slowly through the neighborhood of cul-de-sacs and looping streets. When they saw nothing that looked like a headland between two small arroyos, they moved to the next neighborhood, then to the next, and then to the next. Only when Paul awoke and let them know he needed attention did they find a Starbucks and stop. Adam got them each a non-fat Latte while Barbara dug Paul’s bottle out of the diaper bag. When Adam returned to the table he found a policeman standing over his wife and grandson.

“Yes sir,” Barbara said. “We were driving slowly through the neighborhood, several of them in fact.”

Adam put the Lattes on the table and sat down.

“What were you doing there?” the policeman asked. The girth of his upper body indicated he was wearing a vest under his blue uniform shirt.
Adam said, “We were looking, and intend to continue to look, for a small headland bounded by two small arroyos. So far, all we’ve seen is developments where any trace of any geological feature has been bulldozed over.”

“Why are you doing that?” The tone of the man’s voice had softened a little.

“We’re looking for the legendary Lost Frenchman Mine. We have reason to believe it’s nearby,” Adam said.

“You’re looking for what?”

“The Lost Frenchman Mine.” Adam took the Legends book out of the diaper bag and handed it to the policeman. “Here. Read about it.”

The policeman read the account of the mine, and then handed the book back to Adam. “I’ve lived here all my life, and I have never heard of this mine. I guess you’re free to look for it all you’d like, but be careful. People cruising these streets might give the wrong people the wrong idea. I’d hate to find you lying in the street somewhere.”

Barbara said, “We thought the morning would be the safest time.”

“It is, but that still doesn’t make it safe for you. I recommend you go back to your home and leave this part of town alone.”