You are here: Home › All American Road
By Don Lake on December 2, 2014 in Non-Fiction, Writing 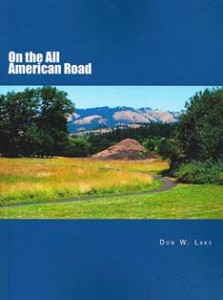 Look for America on US Route 12 and you’ll find auto workers, pioneers, factory hands of all types, politicians, farmers, cowboys, explorers, miners, Indians, and sailors among others.  They’ll be in large cities, small cities, towns, hamlets, and sometimes in places with no names at all.  You’ll find them in forests, prairies, mountains, an sea shores, and alongside rivers, dwelling in apartments, houses, ranches and even RVs.   Drive its nearly 2500 miles, America is there, on the All American Road.

America has always had a love of the automobile, ever since there was such a thing. Where else to begin the quest for America but in the heart of one of the things we love best. US Route 12 begins in Cadillac Square Park in the center of downtown Detroit, and heads out through Motor City.

The first, famous, search for America was published by Alexis de Tocqueville, “Democracy in America,” 1835. Perhaps his hardest times of his entire trip was slogging through the wild forests of Michigan, a place where he met and wrote of the ultimate American pioneer. US Route 12 traverses that same area.

America works, and perhaps nowhere is that more evident than in Chicago, Emerson’s “City of the big shoulders” and the center of the Industrial Heartland. While US Route 12 only spends a short distance in Indiana and Illinois, it cuts through the heart of it, steel mills, refineries, railroad yards, and factories.

American politics are the politics of a progressive concern for the little guy, the underdog. Perhaps nowhere has that been more visible than in Wisconsin’s capitol of Madison. From La “Fighting Bob” La Follette to today’s Scott Walker, Madison is at the cutting edge. US Route 12 is a Madison main road.

Amber waves of grain, perhaps the most recognized line from “America the Beautiful,” lives in the broad fields upper mid-west portion of America’s heartland. US Route 12’s longest unbroken stretch of similar scenery is through the wheat fields of Minnesota and the Dakotas.

The cowboy, symbol of independence and self-reliance, is alive and well in the American west. Perhaps nowhere else does his life remain as pure as in Montana. US Route 12 crosses Montana from one side to the other.

Explorers, brave men risking everything to find out what is beyond the next mountain, have always been American heroes. Lewis and Clark in their incredible journey of 1804 – 1806 led the way through the American West. A long stretch of US Route 12 is designated as a part of the Lewis and Clark trail.

Gold, the lure of gold to bold men, and the exploits of those men are a part of the American legend. The largest gold rush of the Pacific Northwest occurred in the Bitterroot Mountains of Idaho, the last mountains conquered by US Route 12 when the road was completed in 1962, and where towns carry names like Orofino (Fine Gold).

Indians, the iconic American, our true native sons, once lived everywhere along the All American Road. The last to be conquered, the Nez Perce, rely on US Route 12 as the main east-west artery through its reservation.

The American soul seems somehow tied to the sea. The sea brought the first settlers, great glories, and the means to make a living for as long there has been an America. US Route 12 ends at the port of Aberdeen on the Pacific Ocean.

Look for America on US Route 12 and you’ll find auto workers, pioneers, factory hands of all types, politicians, farmers, cowboys, explorers, miners, Indians, and sailors among countless others. They’ll be in large cities, small cities, towns, hamlets, and sometimes in places with no names at all. You’ll find them in forests, prairies, mountains, on sea shores, and alongside rivers, dwelling in apartments, houses, ranches and even RVs.

Drive its 2483 miles. America is there, on US Route 12, the officially designated, All American Road.

Mystery Spot
One Lap Around California