You are here: Home › Baseball
By Don Lake on June 6, 2020 in Biographical, Blog, Sports 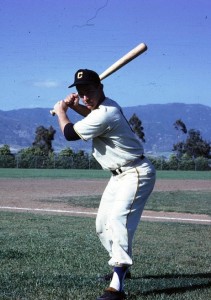 Baseball has been a lifelong passion for me. I played as a kid in Little League, in Babe Ruth League including on a team that won the State Championship, in high school, at all three of the high schools I attended. I played as a young man in college, as the publicity pose above shows, amateur, softball, fast pitch and slow pitch, company ball, rec league, including co-ed. When not playing I coached Little League and Bobby Sox. I played Senior League from rec leagues to traveling tournament teams, including one team that won a national championship. Along the way I played catcher, outfield, infield and pitcher. Whatever, wherever, just so I could play. And when I wasn’t on the field, I read about baseball. My baseball library includes almost 1000 volumes.

Today I play in the La Mesa Senior Softball “B” league with a bunch of other guys and a few girls, the average age is 73, who just love to play the game. There are a lot of special rules to try and prevent any possible injury, and still others that accommodate those of us with artificial joints. Here in suburban San Diego we play three days a week, 52 weeks a year. Abner Doubleday has to be smiling in his grave. 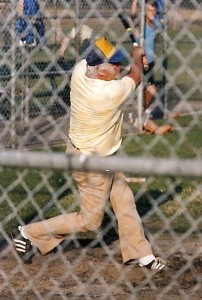