You are here: Home › RoboDoc
By Don Lake on December 2, 2014 in Teen Fiction, Writing 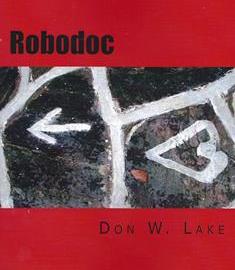 RoboDoc is the story of Jerry Kindall, a high school senior and the best video game player anyone had ever seen, his girlfriend Sarah, who gives Jerry a Christmas present of her pregnancy, Jerry’s first job, his hard-nosed ex-Marine boss Hank, and Max, the robot he brings to a level of success unimagined by any and all involved. Jerry and Sarah make the difficult choice of having their baby. Although they are not ready for the physical and emotional hardships that decision entails, they take on the challenge. Jerry, Sarah, and Max grow and mature until Max’s success triggers greed in those around them, and potential mortal danger to them all. Set in the development laboratory of a medical technology company and the surrounding San Diego neighborhoods, spotlights the best of America’s youth and its innovation.

She sat waiting on the lowered tailgate of a faded green, old pickup jammed into a spot in the student parking lot. She didn’t wave when she spotted him starting down the stairs next to the Grossmont High School sign. “What took you so long? I’ve been waiting here forever!” she said when he reached her.

“Hey, the bell only rang five minutes ago and the science building is all the way across campus,” he said.

He slid up onto the tailgate next to her. When he leaned to put his arm around her, she yelled, “Don’t touch me! Stay back.”

He dropped his arm. “What’s wrong? Our last Christmas break in high school starts today. No classes for two weeks. Presents for everybody. You’re supposed to be happy.”

“Of course I’m sure,” she said in disgust. “I’m three weeks late for my period, so I took the test today. I’m pregnant.”

“No. You promised you’d be careful. You did it. Beast!”

“What’ll I tell my father? He’s gonna kill me,” she said.

“Not so loud. Everyone can hear you.” She put her hand over his mouth.

He wrapped his arms around her. She stopped shaking, put her head on his shoulder and started crying. He held her until he felt her go limp. “Just don’t tell anybody, Sarah. Don’t tell your mother. Don’t tell your friends, nobody. Don’t say a thing to anyone. We’ll figure it all out by the time school starts again.”

“This is all going to be all right. Don’t worry,” he said.

“OK then, be worried. Be scared. It’s natural. Just don’t tell anybody. Don’t act nervous. Act like you’re having a great Christmas,” he said. “Really. Who knows what next Christmas will be like?”

“Remember, don’t tell anyone until we figure out what to do.”

“You’ll do fine, I know you will,” he said. Then he hugged her again.

The day after Christmas Jerry’s dad somehow managed to hear the doorbell over the sounds of the video game blasting from the family room. He opened the door just as the sound of the loudest explosion yet echoed through the house.

The two walked into the family room. “Jerry,” his dad said. “You’ve got company. I’ll be in the shop if you need anything.”

“Hang on a second,” Jerry said without turning his head. The action on the 54 inch wall mounted monitor continued for a few seconds before it paused. A second or two later the screen went dark. Satisfied, Jerry swiveled his chair around.

“It’s you. I didn’t expect you so early,” he said. “This is the upgrade to GI Sweeper. Got it for Christmas.”

He wrinkled his brow. “Are you feeling OK? You look a little pale.”

“A little sick this morning, but I didn’t throw up.”

Jerry jumped up from his chair. He moved to Sarah’s side, took her hand, and led her to the leather couch. “Here, sit down.” He put his arm around her and gave her a hug.

“I’ve really thought about this. I’m not too good at school, so I decided a career isn’t for me. I haven’t got any special talents. All I know is that I really like kids.So, I decided that what I’m here on earth for is to be a mother.”

Jerry stared into her eyes.

Jerry’s head dropped. He put his hand over his forehead. He gazed down at his lap. Neither spoke for several moments.

It was Sarah’s turn to stare.

Sarah hugged him. She cried. When she could finally talk, she asked “What’s going to happen?”

Jerry whispered into her ear. “I don’t know. All I know is that a zillion others have gone through it and lived happily ever after. We will too.”

Jerry trailed behind the wheelchair across the large open room. Hank threw open a set of double doors and rolled into a small room, not much bigger than a walk-in closet.

The two of them stopped in front of what Jerry thought might just pass for a very large beer keg; round, silver, and flared at the base like bell bottom pants. Protruding from each side was one of its four arms. Equally spaced around the top were twelve high-speed combination color, black-and-white, and infrared television cameras. The whole assembly sat on a chassis sporting a pair of caterpillar treads. Three different antennas poked up out of the top.

“Nice,” Jerry whispered under his breath.

“Don’t let it fool you,” Hank said. “There’s really not much to it. Disposable you know. Your truck has much more in the way of mechanical stuff than RoboDoc. It’s a simple machine. Except for the electronics, of course. They’re really something.”

“Sir, I figure the first thing is to make it move,” Jerry said.

“Right on, Boot. There are four wheels under that belly. Two steer, two are fixed. You get to decide which two are which.”

“Wheels for smooth surfaces. He’ll do thirty on a road,” Hank said. “The tracks are for rough terrain.”

“Day, night, bright, dim, he can see in any condition. In any direction. Binocular vision too. All you have to do is pick which cameras to use.”

“Can he recognize where he’s going, sir?”

“Does he know any evasive moves? Any moves at all?” Jerry paused a moment before adding, “Sir.”

“Now then, Boot. You’re the video game expert. You’ve got all the moves down pat. All you have to do is teach them all to him.”
Jerry shifted his gaze from RoboDoc to the man sitting in the wheelchair beside him.

“Sir, I crashed a zillion times learning some of those moves. What if RoboDoc crashes and breaks?” Jerry asked.

“Start slow, but RoboDoc’s tough. I doubt you’ll break him. If you do, it’ll give the lads up front something to work on to improve him.”

“Besides, you’ll have everything worked out on the simulator first,” Hank said.

“If it simulates right and crashes in the field, or the other way around, well, the guys up front need to know that too,” Hank said.
Jerry went up and touched RoboDoc’s arm, and then the shiny body. “It’s cold, sir.”

“Of course it is, Boot. You haven’t given it life yet.”

“It’ll be your second life this year, eh, Boot?”