You are here: Home › Sacajawea’s Ghost
By Don Lake on December 2, 2014 in Teen Fiction, Writing 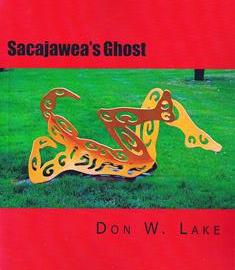 All Lolo wanted to do was to get an A on her freshman science project.  She didn’t want to scare anyone, well maybe just Sam, the class bully.  She didn’t want an accomplice, especially Rye.  And she surely didn’t want to incur the wrath of Sacajawea and the entire Nez Perce tribe.  But since she did, she had to deal with it, somehow.

Lauren slammed shut her laptop when she heard the screams, and dashed up the stairs. Her little sister, Brianna, gestured wildly at her collection of birthday cards on display on the kitchen window sill. Every one of the musical ones was singing.

At the sink their mother jabbed at the buttons of the blender in front of her. The electric can opener and the electric wine opener ground away on the adjacent counter.

“What happened? Are you OK?” Lauren yelled above the noise.

“Everything started all at once,” her mother said.

Lauren gagged at the orange goo splattered all over her mother’s face, the kitchen walls and ceiling.

Her mother picked up the can opener and asked, “How do I stop these things?”

Lauren pulled the can opener plug out of its wall socket. It stopped. Then she unplugged both the blender and the wine opener. They stopped. Brianna opened and closed each of the musical cards. Each quit making noise.

“Thank goodness. Look at this mess. Look at me. There’s acorn squash all over everywhere.”

“Mom, what in the world happened up here?” Lauren asked in her normal voice.

“I don’t know. All of a sudden everything just started. It was like a ghost blew through the house. Weird.”

“I thought I felt a gust of cold air right when it happened,” Brianna said. “I didn’t know whether to scream or shiver.”

“You screamed.” Lauren said. “You both screamed.”

Lauren’s mom plugged the blender back into the wall. Nothing happened. When she pushed a button it hummed to life. Another push and it stopped. Brianna opened one of her cards. It sang. When she closed it, it stopped. Lauren plugged in the can opener and wine opener. Both stayed quiet.

“It looks like everything is back to working the way it is supposed to. Brie, come help me clean up this mess. Lolo, are you done with your homework?”

“Almost Mom. The science project is taking longer than I thought it would. I was working on it when you screamed. It’s due tomorrow.”

“Then you’d better go finish it.”

Lauren carried her laptop, science project, and her report around school all day until she finally got to her 5th period science class. The teacher stood at the door collecting each student’s report when they stepped into the classroom. At the sound of the bell, he shut the door, marched to the head of the class, and said, “Those of you who would like to get extra credit by demonstrating their project to all of us, raise your hands.”

Six students held up their hands. The teacher noted the names on separate scraps of paper, put them in a jar, shook the jar, held it front of Ryan, and said,

“Mister Hardtke, please draw the name of the first demonstrator.”

“Hey, Rye,” came a baritone voice from the back of the class. “You finally got something you can do.” Several classmates laughed.

Lauren sat quietly, bent over her desk with her head in her hands. She leaned back and looked up when Ryan called out, “Robert Thompson.”

He and three others demonstrated before Lauren grabbed her backpack and started for the front of the classroom. “Hey, Lolo,” came the baritone voice from the back. “You doing boring again?”

Lauren turned toward the voice. “Cover your eyes, Sam, or you’ll be blinded.”

Lauren set her laptop on the table, connected the cable to the dark green board, positioned the board so that the narrow end pointed toward the ceiling, and the LEDs facing out toward the class. “This is my Fibonacci based, music driven, light generator,” she announced.

“Fibonacci is a specific numerical sequence. I used it to determine the position of the light emitting diodes, or LEDs, for you Sam and all the rest of you who are technically challenged.”

A low oooooh spread across the classroom.

“The music determines which lights are when, and how bright they are. I picked the first movement of Beethoven’s 5th Symphony as the music. It’s only got four notes, so even Sam can understand it.”

Ryan laughed. Everyone else turned to look at Sam. “Dazzle me Lolo. You do it good and I’ll name a pass after you.”

She reached over and hit a key on her laptop. Ta-Ta-Ta-Tah rang out at the highest volume the laptop could produce. The LEDs erupted in brilliant light in synchronism to the rhythm of the music. The smoke and gas detector in the ceiling joined in with an ongoing series of high pitched screeching noises.

“Hot stuff, Lolo!” Sam yelled. He jumped up and dashed toward the door.

“Fire drill! Fire drill! Everyone out. Assemble at the far end of the parking lot,” the teacher hollered over the din.

The students gathered their things and fled the classroom. Lauren stuffed her laptop and project into her backpack and left them. Ryan followed her. They could hear alarms screeching from all over the school as they hurried down the hall toward the double doors that led to the student parking lot.

“How’d you do that, Lolo?” Ryan asked when they were far enough away from the building to be heard.

All of the students in Orofino High stood in class groups in the warm May sunshine. Every teacher took attendance. The screeching stopped abruptly thirty seconds before the bell rang ending the school day.